The Day of the Beast 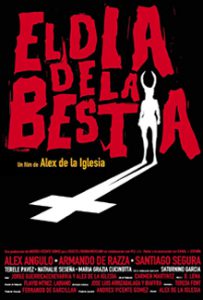 The Day of the Beast is a 1995 Spanish black comedy horror film co-written and directed by Álex de la Iglesia.  Determined to commit as many sins as possible after deciphering the code behind Saint John’s cryptic Book of Revelation, the dedicated Catholic priest, Father Ángel Berriartúa, heads to Madrid to avert the birth of the beast and the end of the world. According to his calculations founded on a numerical transcription of the Apocalypse, the birth is going to take place somewhere in the Spanish capital on Christmas Day; however, time is running out, and the good father needs to pinpoint the exact birthplace. Without delay–although uncertain on how to get started–Father Berriartúa teams up with the enthusiastic Black Metal aficionado, José María, and the Italian TV show host and connoisseur of the occult, Professor Caván. Now, the once-pious man must become an unrelenting sinner to foil the arch-enemy’s plans.