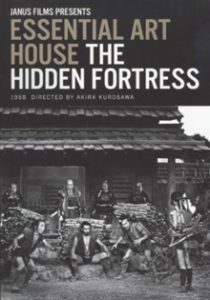 One of the greatest action-adventure films ever made, The Hidden Fortress stands alongside the finest achievements of its creator—Japanese film master Akira Kurosawa. Produced in 1958, this thrilling Cinemascope epic—starring Kurosawa’s favorite actor Toshiro Mifune—is set squarely within the traditions of the Japanese film genre known as the “Chambara.”

At heart the story is a simple one. Having escaped the clutches of an enemy clan, Princess Yuki (Misa Uehara), her loyal retainers, and her faithful military commandant, General Rokurota Makabe (Toshiro Mifune), are hiding out in a secret mountain fortress. With their clan’s precious gold horde hidden in sticks of firewood, they plan to make their escape across a nearby border by disguising themselves as peasants. Once on their way, it’s one chase, swordfight, and hairs-breadth escape after another.  Two peasants, Matashichi (Kamatari Fujiwara) and Tahei (Minoru Chiaki), live on the lowest possible level of the feudal totem pole. They’re entirely at the mercy of whatever military faction is currently holding sway. Threatened with death at one moment, forced into slavery at another, their lives are one long process of victimization. When they discover the clan gold, they leap on it like starving animals—each claiming sole ownership rights.

For the Princess and the General, this greed proves useful. They need help in carrying the gold across the border. With troops on the lookout for them, the peasants will provide something of a disguise. Matashichi and Tahei, for their part, have no idea who the Princess and the General are, and are only too glad to help. Blinded by greed, they plot to steal the gold along the escape route. Part Shakespearean clowns, part Laurel and Hardy, the pair’s antics provide both a “worm’s eye view” of history, and form a backdrop for Kurosawa’s particular take on certain aspects of Japanese tradition—which is at once both celebratory and critical.