Every Time We Say Goodbye 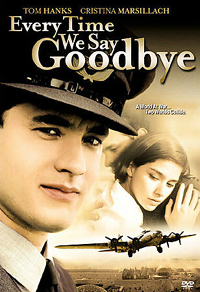 An American pilot in Jerusalem during World War II falls in love with a young Sephardic Jewish woman while he is recuperating from a serious injury after his plane is shot down in North Africa. At first, he resists the intriguing Mediterranean beauty, but soon becomes locked in a powerful love affair that goes against both heritage and tradition, causing friction in her family.  It is the remarkable story of a forbidden love, religious/cultural differences, and the sacrifices that are made in the face of human prejudice.