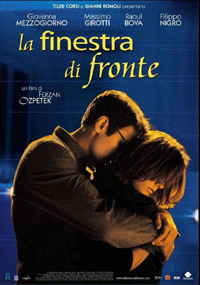 Overburdened and stuck in a greying marriage, Giovanna, the young heroine of Ferzan Ozpetek’s Facing Windows, faces a crossroads that appears in the form of an aging man losing his memory clinging to a difficult choice he made a lifetime ago. When Giovanna and her husband bring home the confused elderly man they find wandering in the streets, the man’s presence begins to have a profound effect on the young wife and mother.

The film features dual love stories, one from the 1940s between two Italian Jews and one contemporary story of neighbors who watch each other furtively from facing windows across a street. The sexual tension between a sexy but routine-weary woman and her hunky Italian Clark Kent look-alike neighbor gives way to quiet communication and a profound experience when together they befriend an elderly Jewish man with memory problems. Davide (played to perfection by veteran Italian actor Massimo Girotti) turns out to be a master baker, a metaphor for the alchemy of creation not lost on Giovanna, who bakes to supplement her income working in a factory. Davide lived through the October 16, 1943, roundup of Jews in the Rome ghetto and the subsequent deportation and loss of his family and his lover. Ozpetek, an accomplished director, captures the weight of a lifetime of memories as well as the quotidian intimacy and brief exchanges that really make up our lives. His dual cultural background (Turkish and Italian) gives him both an outsider’s and insider’s perspective on how the history of fascism impacts Italians today: perhaps not very much on the surface, but lurking metaphysically in the crevices of their consciousness and in the piazze—which in their mute inertia do not miss the Jews who were deported but witnessed their leaving.