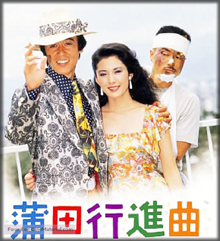 Ginshiro Kuraoka (Kazama) is an actor whose once-hot career is on the skids. He has planned a spectacular fight scene for his latest picture in order to one-up his acting rivals, but it’s so dangerous that no stuntman will take the job until desperate and loyal bit player Yasu (Hirata), a member of movie star Ginshiro’s entourage, accepts the challenge. Yasu has already agreed to marry his boss’s pregnant mistress Konatsu (Matsuzaka) to help Ginshiro avoid a career-threatening scandal, and so to provide for his new bride (whom he has always loved), Yasu is ready to tackle the dangerous stunt.