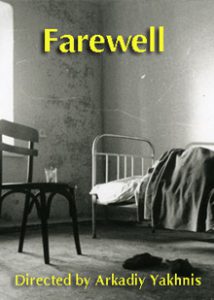 Farewell chronicles a 90-year old man’s emigration to Israel from his Soviet Bessarabian town. The film visualizes a particular moment in Soviet and immediate post-Soviet history when Jews are participating in the most recent migration of Jews – the exodus from late and post-Communist Europe to Israel, the USA, Germany and elsewhere. The film also captures the ambivalence many Soviet Jews felt upon departure. Departure was not generally conceived of as an exile, since they were leaving of their own volition.  For the main character in Farewell, leaving is experienced as nothing less than psychic rupture, an emotion appropriately colored gray in the entire film.”  Yakhnis’ beautifully-photographed film poetically captures the end of a rich Jewish heritage in Russia.