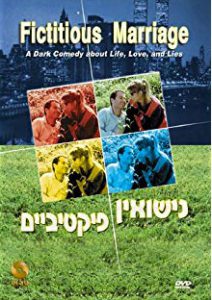 Shlomo Bar-Aba plays Eldad Illan, a teacher who says goodbye to his wife (Ofra Viengarten) in Jerusalem, goes to Lod Airport for a flight to New York and then sneaks back to Tel Aviv. Illan, apparently undergoing a midlife crisis, pretends to be a naturalized American and checks into a cheesy hotel staffed by an amicable Arab bellhop and a wiggly Israeli concierge (Irit Sheleg). Later, while sitting in the park, he is mistaken for a fellow Arab by a construction foreman, who takes Illan, now feigning dumbness, under his wing.

Every day Illan goes off to work with the Arabs, who share their simple meals and kinship. In the evenings he delights in the charms of the ditsy concierge, who thinks he plans to marry her and take her to a fairy-tale America — hence the title “Fictitious Marriage.” Meanwhile a detective who has discovered Illan’s luggage at the airport begins to move in on his lost weekend.  Written and directed by Haim Bouzaglo, the political comedy takes a decidedly sympathetic look at the hard-working, God-fearing Arabs of the Gaza Strip.