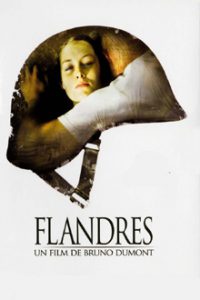 Promiscuous farm girl Barbe (Adélaïde Leroux) entertains numerous lovers, but mostly prefers the company of Demester (Samuel Boidin). Demester seems incapable of commitment, and so Barbe sleeps with Blondel (Henri Cretel) out of revenge. Soon after, she sees both lovers off to war. While Barbe discovers she is pregnant, Demester, Blondel and other locals are trucked away to be sent to an unnamed war in an unnamed land. They commit atrocities and are themselves the victims of unspeakably horrible experiences. Demester, who survives, returns. Barbe in the meantime has had an abortion, spent time in a mental hospital, is back on the farm. They have sex again. “I love you,” Demester says. They are the saddest words in the movie.