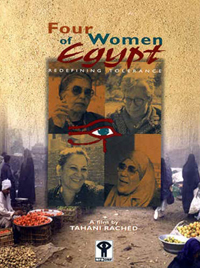 The film opens with four middle aged women walking on a bridge at the barrages south of Cairo, Egypt. The four women speak throughout the film about Egypt, its politics, culture, and Islam, the most popular religion in the country. They connect the politics and ideologies of past and present with their own experience. The four women are friends and were born under the colonial occupation of Egypt. They share their memories that span five decades throughout the film. The four women were political prisoners under the regime of Anwar Sadat.