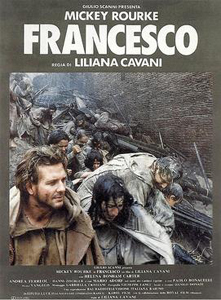 Francesco is a 1989 docu-drama relating in flashback to St. Francis of Assisi’s evolution from rich man’s son to religious humanitarian and finally to full-fledged saint. The film was based on Hermann Hesse’s Francis of Assisi, which director Liliana Cavani had previously filmed in 1966. It was shot in the Italian region of Abruzzo and it stars Mickey Rourke and Helena Bonham Carter. Greek composer, Vangelis, provided the musical score.

Raised as the pampered son of a merchant, Francis goes off to war, only to return with a profound horror for the society which generated such suffering. In one scene, as an act of renunciation, he strips himself of his fine clothing in front of his father, and leaves the house naked and barefoot, joining the lepers and beggars in the poor section of town. A series of episodes from Francis’ life follows, rather than a coherent narrative, until his final days when he receives the stigmata, the wounds Christ suffered at the crucifixion.