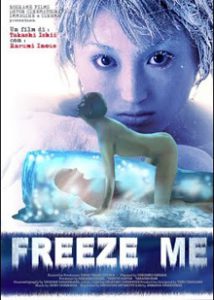 Chihiro is a Tokyo professional about to marry her long time colleague, Yusuke. However, Chihiro has a chilling past that threatens to destroy her promising future. Three men who once raped her have reappeared. When one of the rapists arrives at her apartment and says that the others are on their way, behaving like her long-lost lover and mistreating her again, Chihiro takes revenge, kills him and puts him in a freezer. The other rapists are awaiting a similar fate.