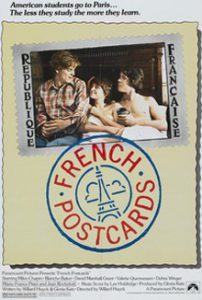 French Postcards is a 1979 romantic-comedy film about a group of American exchange students who spend a year studying in Paris. Madame Catherine Tessier (Marie-France Pisier), who with her husband, Monsieur Tessier (Jean Rochefort), directs and teaches at “The Institute”, takes special interest in Alex (David Marshall Grant), whose ambition is to experience Parisian life; Madame Tessier’s interest extends beyond the classroom and into her bedroom. Debra Winger and Mandy Patinkin co-star in this comic, coming-of-age tale co-written by American Graffiti screenwriters Gloria Katz and Willard Huyck, who also directs.