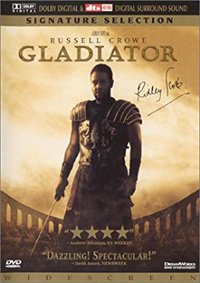 Gladiator takes place in ad 180 and is loosely based on historical figures. Roman forces, led by the general Maximus, defeat Germanic tribes, bringing temporary peace to the Roman Empire. The emperor, Marcus Aurelius, tells Maximus that he would like Maximus to succeed him upon his death and for Maximus to return power to the Senate, restoring the Roman Republic. However, when Marcus Aurelius tells his arrogant and unstable son Commodus about the plan, Commodus flies into a rage and kills his father. Commodus becomes emperor and orders the death of Maximus and his family. Maximus escapes and rushes to his home in Spain, only to find his wife and son already dead and his house burned down. Maximus is then taken by a slave trader to North Africa, where he is sold to the gladiator trainer Proximo.

Proximo and his troupe know Maximus only as the Spaniard, and he soon becomes a top gladiator under that name. When Commodus decides to stage a gladiatorial spectacle in Rome, Proximo brings his gladiators to participate. In the first fight, intended as a battle reenactment, Maximus rallies the other gladiators and leads them to victory, to the delight of the crowd. He defeats the Roman champion in one-on-one combat and then reveals himself as Maximus. Commodus’s sister, Lucilla, and the senator Gracchus agree to help Maximus escape to gather his army and depose Commodus, but Commodus discovers the plot. When Maximus attempts to make his escape, Roman praetorians kill Proximo and the other gladiators assisting him and recapture Maximus. Commodus declares that he will meet Maximus in single combat in the arena, but he first stabs Maximus to weaken him. In the arena, Maximus kills Commodus and then dies himself after ordering the reinstatement of Senator Gracchus and the restoration of republican rule.