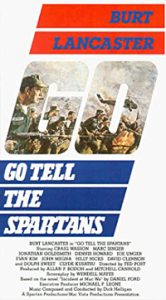 Go Tell the Spartans is a 1978 American war film directed by Ted Post and starring Burt Lancaster. The film is based on Daniel Ford’s 1967 novel Incident at Muc Wa about U.S. Army military advisors during the early part of the Vietnam War in 1964, when Ford was a correspondent in Vietnam for The Nation.

In the early war year of 1964, Muc Wa has no significance; no Cong sightings have been reported within 50 miles. But U.S. headquarters in Da Nang wants Muc Wa occupied and defended, and so it is the task of the major and his men to occupy and defend it.  The major is a cigar-chewing veteran of Korea, a career soldier. His men are, officially, American military advisers, commanding a ragtag unit of Vietnamese volunteers. He has grave misgivings about the way this war is being run, especially when he’s given his own psychological warfare expert, complete with computer printouts and color-coded gadgets to predict where the Cong will strike next. Lancaster knows better: The enemy is everywhere and nowhere, and the assignment of American forces to Muc Wa will serve only to draw Cong there, too. He knows this, and falsifies a report, and his bluff is called, and he winds up sending men to Muc Wa all the same. Sure enough, the Cong turn up.  Go Tell the Spartans considers the war in Vietnam in terms of the microcosm of Muc Wa in 1964, and so contains a lot of statements that are meant to be prophetic in hindsight.  Doubtful about the wisdom of involvement in Vietnam, Major Barker attempts to bring honor to his regiment of Americans and Vietnamese mercenaries doomed by foolish leadership.