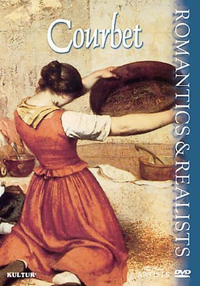 Gustave Courbet loved to present himself as a hard-drinking, radical-thinking peasant artist in mid-nineteenth century Paris, but his public image was largely a creation of his own, yet with his greatest paintings his radicalism was for real.  Courbet’s famous peasant scenes like his enormous Burial at Ornans were like nothing ever seen before. This was the art of Realism and many critics were outraged. How could a painter make common people the subject of High Art? But Courbet defied the critics to secure the fame that he craved and deserved.

This documentary features in-depth analysis of the artist’s life and oeuvre. The program provides detailed commentary about Courbet’s style, technique, and creative process, focusing on his important contributions to still-life painting, portraiture, and his dramatic, thoughtful rendering of everyday life. Art scholars discuss Courbet’s aesthetic significance within the Realist movement as a whole and offer relevant cultural background to help the audience understand and appreciate the historical context in which Courbet created. Contains footage shot on location.