He Walked Through the Fields 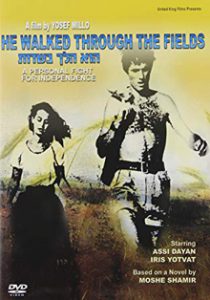 In 1946, Uri (Assi Dayan) returns to his kibbutz after 2 years of studying. He begins to feel alienated after discovering that his mother is having an affair with an outsider and his father has joined the British army. He meets Mika (Iris Yotvat), a young Holocaust survivor from Poland who is finding it difficult to adjust to kibbutz life, and soon falls in love with her. With Israel on the verge of statehood, and despite Mika’s objections, Uri joins the Palmach, the pre-state Jewish underground militia, leading his men on missions and maneuvers without being aware of Mika’s pregnancy.  Uri volunteers for a dangerous military operation and is killed while blowing up a bridge controlled by the British. His parents receive the tragic news, but are comforted by the grandchild that is to be born to them.