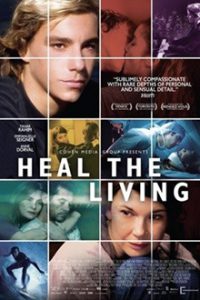 Three teenage boys meet up before dawn to go surfing. They huddle together, zipping up their wet suits, and then plunge into the cold, heaving ocean. Waves surge up, and the boys bob on their surfboards, three dark heads against the blue.  It is the moment that matters: the thrill of standing up on the board, the silence that accompanies challenging physical activity, and the beauty of the waves seen from underneath the surface.  The fact that the morning ends in a tragic car accident, leaving one of the boys in a coma, just intensifies the memory of that opening sequence—its vision of grace, strange beauty and the wonder of the momentary.

As Simon (Gabin Verdet) lies in a coma, his estranged parents (Emmanuelle Seigner, Kool Shen) hover over him, brought together by trauma, bewildered at the disaster that has befallen them. The head surgeon (Bouli Lanners) informs them that their son is brain-dead, and gently reminds a new nurse (Monia Chokri) that the parents need to get used to the fact that their son is no longer “there.”  He is kept alive by machines and his parents must quickly make a difficult decision about possible organ donation.