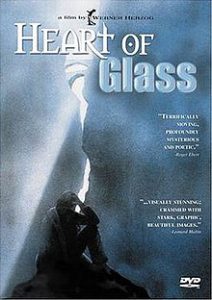 The setting is an 18th-century Bavarian town with a glassblowing factory that produces a brilliant ruby glass. When the master glass blower dies, the secret of producing it is lost. The local Baron, who owns the factory, is obsessed with the ruby glass and believes it to have magical properties. With the loss of the secret, he descends into madness along with the rest of the townspeople. The main character is Hias, a seer from the hills, who predicts the destruction of the factory in a fire.