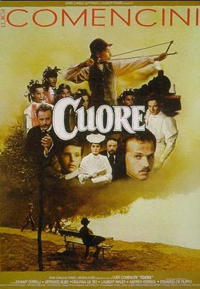 Heart is a television mini-series based on the novel by Edmondo de Amicis and tells the story of children in an elementary school in World War I, through the recollections of three adults, who were school friends and meet again many years later.  In the first episode, Enrico Bottini, an engineering student, prepares to serve as an officer when Italy declares war on Austria-Hungary. At the train station, he meets Garrone, an old friend from elementary school, and begins to reminisce on the values instilled to him by both school and his father.  The third episode is also included in this collection.