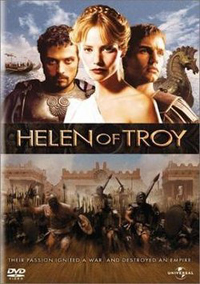 Helen of Troy is a 2003 British-American television miniseries based upon Homer’s story of the Trojan War, as recounted in the epic poem, Iliad.  It stars Sienna Guillory as Helen, Matthew Marsden as Paris, Rufus Sewell as Agamemnon, James Callis as Menelaus, John Rhys-Davies as Priam, Maryam d’Abo as Hecuba, as well as Stellan Skarsgård as Theseus. The series was entirely shot on location in the islands of Malta.

Though married to Menelaus, King of Sparta, Helen falls madly in love with Paris, a handsome Trojan prince.  Together, the lovers flee to Troy, where Paris’ father, King Priam gives them safe haven.  Bent on bringing Helen back, Menelaus’ ruthless brother, Agamemnon, leads the skilled Spartan army to the shores of the fortified city.  After a ten-year siege, the Greeks win entrance to the fortified city using the fabled Trojan Horse, beginning the decisive battle which would ultimately decide the destinies of two empires.