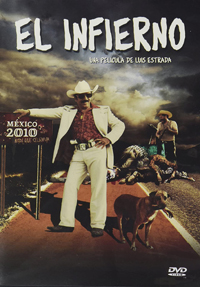 El Infierno is a 2010 Mexican black comedy crime drama film produced by Bandidos Films, directed by Luis Estrada and following the line of La ley de Herodes. The film is a political satire about drug trafficking, organized crime, and the Mexican Drug War.  El Benny is deported from the U.S. and returns home to a Mexico devastated by the drug wars. To survive, he too joins in and starts climbing the hierarchy, finding a prosperous life full of money, women, violence, and fun.  He eventually discovers, however, that a criminal life is not as rewarding as he expected.