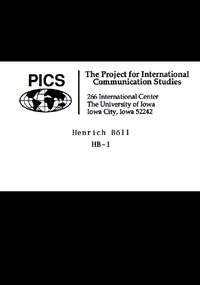 Despite the variety of themes and content in his work, there are certain recurring patterns: many of his novels and stories describe intimate and personal life struggling to sustain itself against the wider background of war, terrorism, political divisions, and profound economic and social transition. In a number of his books there are protagonists who are stubborn and eccentric individualists opposed to the mechanisms of the state or of public institutions.

Böll was a devoted pacifist because of his experiences during WWII. All of his writing and novels during the post-war years had to do with the war and making sure it never happened again. He encapsulated it in the phrase “never war again”.  These and other details of his life are discussed in this interesting video presentation from the Project for International Communications Studies at the University of Iowa.  (In German)