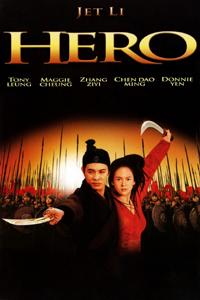 In this visually arresting martial arts epic set in ancient China, an unnamed fighter (Jet Li) is being honored for defeating three of the king’s most dangerous enemies. When Nameless recounts his battles with the assassins — Broken Sword (Tony Leung Chiu Wai), Flying Snow (Maggie Cheung Man-yuk) and Moon (Zhang Ziyi) — the king begins to question some of the details. As Nameless goes on, the king challenges the tales, interjecting his own take on these perhaps suspect versions of events.