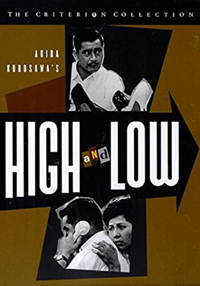 Toshiro Mifune stars as a wealthy industrialist whose family becomes the target of a ruthless kidnapper in Akira Kurosawa’s exemplary film noir. Based on Ed McBain’s detective novel “King’s Ransom,” “High and Low” is both a riveting thriller and a brilliant commentary on contemporary Japanese society.  The film focuses on Kingo Gondo (Toshiro Mifune), a powerhouse executive in the Japanese shoe industry. In the midst of an attempt to take over his company he’s hit by a huge ransom demand, with a twist — the kidnaper (Tsutomu Yamazaki) takes, not his own son, but his chauffeur’s.  Paying the ransom will ruin him financially but not paying it will ruin him as a human being. Gondo’s anguish plays out against the backdrop of financial intrigue and a more conventional police thriller, as Kurosawa delves into the cops’ massive effort to track the kidnapper, led by the sensitive, but briskly ruthless, Detective Tokura (Tatsuya Nakadai).