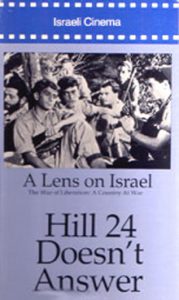 Set during the 1948 Arab–Israeli War, the conflict that led to the creation of the state of Israel, this landmark Israeli film is among the first features from that country to draw an international audience. Four soldiers of fortune — a Palestinian, an Irishman, an American and a Yemenite — have aligned themselves with the Jewish forces. As the group tries to maintain control of a key stronghold outside of Jerusalem, known as Hill 24, each character relates his reason for joining the fight.