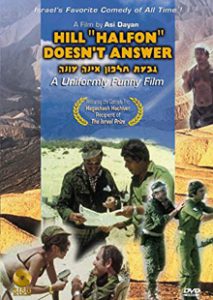 In this satirical cult-classic, a Reserves unit in the Israel-controlled Sinai is less than five miles from the Egyptian front lines. However, the Israelis are hardly concerned with the Egyptians, as half of the Reserve-niks are just happy to get away from their homes and essentially go camping in uniform, while the other half goes crazy in hilarious fashion. When one of the Israelis mistakenly wanders across the lines and is captured by an Egyptian patrol, a madcap rescue mission is hatched. Add to that some oil prospecting, a stowaway girlfriend, and an officer in need of some female attention, and all the ingredients for an enjoyable romp are there.