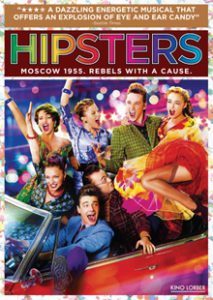 Set in mid-1950s Moscow, the film depicts the Soviet stilyagi subculture, along with their struggle for self-expression within the prevailing reality of the Soviet repression.  While the Cold War heats up on the world stage, rebellious youth in 1955 Moscow wage a cultural battle against dismal Soviet conformity, donning brightly colored black-market clothing, adopting American nicknames and reveling in forbidden jazz. Straight-laced 20-year-old Communist Mels finds these brazen ‘hipsters’ shocking until he falls under the spell of one, namely Polly, and joins the new revolution. Soon he’s a peacock, cavorting in the latest flashy fashions, sporting an enormous pompadour and wailing on the saxophone.