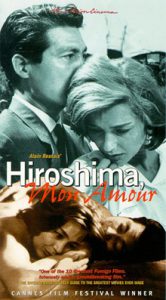 A French woman and a Japanese man have an affair while she is in Japan making a film about peace and the impact of the atomic bomb on Hiroshima. The man, an architect, lost his family in the bombing. The woman, Elle, stands on a hotel balcony in Hiroshima, overlooking the city. She comes back inside to see her architect lover, Lui, naked and asleep on the bed. He wakes up, and the two begin their day. Elle goes to work on the film set of an anti-war film while Lui goes to a World War II museum before visiting the set. Throughout the film, the two converse about memory and forgetfulness as Elle prepares to return to France, putting an end to their brief relationship.

That evening, Elle and Lui go to a restaurant and discuss their murky pasts. Elle grew up in the French town of Nevers under German occupation during the war. She fell in love with a young German soldier and the two made plans to elope, only for him to be shot and killed on the day of Nevers’s liberation by the Allies. Traumatized, Elle was publicly ostracized for her relationship with the soldier and imprisoned in the basement of her parents’ home. Her health eventually recuperated to the point where she could travel, and she arrived in Paris on the day of the Hiroshima bombing. Lui, a Hiroshima native, was conscripted into the Imperial Japanese Army during the war but was away on duty when the bomb dropped and wiped out his family. He returned to Hiroshima after the war and became an architect, during which time he also married.

The pair continue to compare their past relationships with the bombing of Hiroshima and the perspectives of anonymity shared by the people inside and outside the incident. Eventually, Lui asks Elle to stay with him but she turns him down as she has family in France and he has a wife. Reaching the conclusion that her love for Lui is doomed to fail, similar to her love for the German soldier, Elle goes back to the hotel and Lui follows. She lashes out at him, claiming that she is already starting to forget who he is. Exasperated, she begins calling him “Hiroshima”; Lui affirms that he is Hiroshima and that she is “Nevers.”