How Tasty Was My Little Frenchman 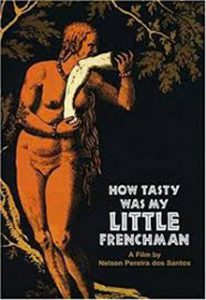 A Frenchman (Arduíno Colassanti), who is part of a faction from his country trying to stake a claim to Brazil before the Portuguese colonize it, is held by a hostile tribe that assumes he is Portuguese. The tribe, allied with the French, is looking to avenge the murder of one of their members by eating a Portuguese soldier during a feast. Although the Frenchman is incorporated into village life, and even given a wife by the tribe, his fate hangs in the balance.  At one point, he uses powder in the cannons that the Portuguese have left behind to defeat the tribe’s enemies in a battle. However, in order to celebrate the victory, the Indians decide to eat him.