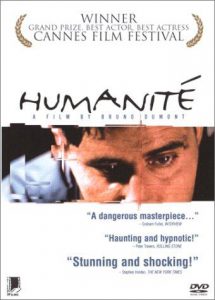 Humanité tells the story of a widowed, unlikely policeman investigating a rape and murder of a schoolgirl in rural France. His slow investigation is interspersed with everyday scenes of his quiet life. The film is shot with little dialogue in a contemplative and symbolical style.  The policeman, Pharaon De Winter, is played by Emmanuel Schotte as a man so seized up with sadness and dismay that his face is a mask, animated by two hopeless eyes. He lives on a dull street in a bleak French town. Nothing much happens. He once had a woman and a child, and lost them. We know nothing else about them. He lives with his mother, who treats him like a boy. Domino (Severine Caneele) lives next door. She has an intense physical relationship with her lover Joseph that gives her no soul satisfaction. It is impossible to guess if Joseph even knows what that is.

Pharaon is consumed with love for his neighbor, Domino, and passively tags along with her and her boyfriend, Joseph. He even watches them make love. Then Joseph comes under suspicion for a brutal murder. These mundane events slowly and cumulatively disclose Pharaon’s despair, and the fear of his own guilt, a universal guilt we all share of our hideous nature.