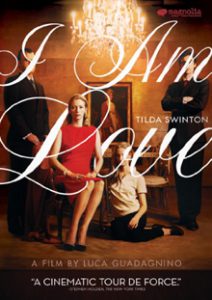 At a dinner — during which her husband, Tancredi (Pippo Delbono), learns that he and his son Edoardo Recchi Jr. (Flavio Parenti) are about to assume control of the Edoardo Recchi Sr.’s (Gabriele Ferzetti) lucrative business — Emma (Tilda Swinton) meets a chef named Antonio (Edoardo Gabbriellini).  Antonio and Emma soon find themselves in bed together. With the family already divided over the elder Recchi’s unusual plans, Emma’s affair is the wild card that might divide the family for good.

I Am Love is an amazing film. It is deep, rich, human. It is not about rich and poor, but about old and new. It is about the ancient war between tradition and feeling. Tilda Swinton evokes Emma as a woman who for years has accepted the needs of the Recchis and discovers in a few days to accept her own needs. She must have been waiting a long time for Antonio, whoever he would be.