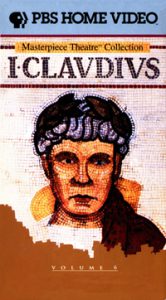 Fool’s Luck – “Trust no one.” This is the advice Claudius hears from a trusted friend as he assumes the imperial throne, but the advice hardly seems needed. The aging emperor is finally at the peak of his life. His beautiful young wife Messalina gives birth to a son and daughter, and Rome’s finances improve under his rule. But the peace is short-lived. Claudius’ young wife secretly lusts after the nobleman Appius Silanus, and to keep him near, she arranges for him to be betrothed to her own mother. Once Appius Silanus is brought into the palace, Messalina attempts to seduce him … but to no avail.With furious cunning, the young woman manipulates events which lead to an attempt on the life of Claudius. By the emperor’s decree, Appius Silanus is sentenced to death for attempted murder.

A God in Colchester – While the emperor Claudius is away, leading his army’s invasion of Britain, his bored wife Messalina passes the time with a succession of lovers. She organizes a tournament of sex, challenging the Guild of Prostitutes to provide a champion to compete with her. Though the emperor returns to Rome victorious, Old Claudius – The Fool – is not a Roman hero for long. The scandalous news about his wife’s behavior awaits him. To make matters worse, Messalina cuckolds Claudius in public by ‘marrying’ another man in a Bacchanalian feast. News of this bigamous marriage stuns the emperor, and following the counsel of his advisors, Claudius signs a warrant for Messalina’s execution. As he mourns the death of his unfaithful wife, Claudius hears ironic news from Colchester in Britain, a territory he conquered. There, a temple has been dedicated to his name, where he will henceforth be worshiped as a deity, the god Claudius.