Walking the Streets of Moscow 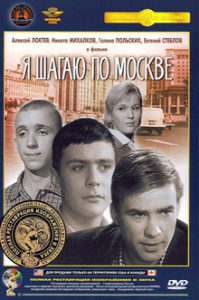 Volodya is an aspiring writer from Siberia. His first short story has just been published in the magazine Yunost (“Youth”), and a famous author, Voronin, has invited him to Moscow to discuss his work. In a Moscow Metro station, Volodya unexpectedly makes a friend, Kolya (Nikita Mikhalkov), who is returning home after a hard night shift. Volodya wants to stay at the home of an old friend, but doesn’t know the address, so Kolya decides to help him find it.  Unfortunately, a dog bites Volodya near Clean Ponds, so the pair goes to Kolya’s home where Kolya sews Volodya’s trousers and introduces him to Kolya’s large family. Volodya discovers that his old Moscow friends are no longer in Moscow (they have moved south), so Volodya stays at Kolya’s.

All the action takes place on a summer’s day where we meet all sorts of people. Beautifully shot in stark black and white, one gets to taste a side of Russia that few know existed. This isn’t the stoic, follow-the-rules-or-else Soviet Union we’ve been led to believe in, it’s a Russia with a heart, a soul and a joy of living that belies the stories told during the Cold War.