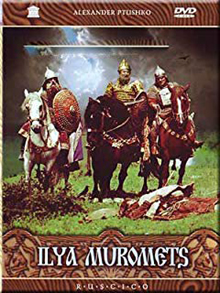 Because his legs have been paralyzed since birth, Ilya (Boris Andreyev) can only watch helplessly when his village is plundered by barbarians. But when a mysterious traveler gives him a magical elixir that restores him to health, Ilya begins an adventure to protect the village and the royal family from harm. First he must capture the ancient Wind Demon that has harassed the peasants from time immemorial, and then he can stand up to the entire barbarian army.