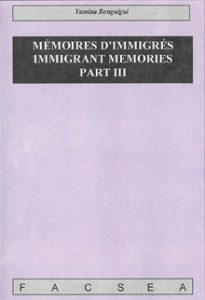 Yamina Benguigui, a woman filmmaker of Algerian descent, described this documentary film project as ‘the narrative of my journey at the heart of the Maghrebi immigration in France. The history of fathers, mothers, children, the history of my father, of my mother and my history. The tripartite documentary gives an account of the collective memory of the Maghrebi diaspora in France, juxtaposing the voices of Maghrebi immigrants with those of state officials who devised or implemented immigration and social policies.

Benguigui uses the familial roles of ‘The Fathers’, ‘The Mothers’ and ‘The Children’ as the titles of this tripartite documentary in order to express her affiliation and solidarity with the immigrants of Maghrebi descent, whose voices and memories she records in a series of interviews.