In the Name of the Pope-King 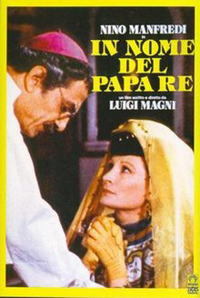 In 1867, with Garibaldi’s forces close to bringing Rome into the Italian kingdom, Monsignor Colombo da Priverno, a world-weary judge on the papal court, wants to resign, disgusted by the violence to which the papacy resorts to hold on to secular power. That night, three rebels blow up the Zouaves’ barracks. Colombo learns that a brief liaison with a countess 20 years before, produced a son who is one of the rebels arrested for the bombing. He uses his influence to gain the youth’s release, hides him, and then engages in doomed battles of wit with the court and with the Black Pope to free the other two. Can this priest be a father?  Can he blunt power, and live out his faith?