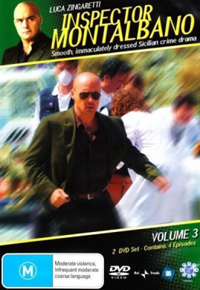 Based on a character created by Italian writer Andrea Camilleri in a series of novels and short stories, each episode of ‘Inspector Montalbano‘ tells a stand-alone story of the inspector’s astute detective work in and around the fictional Italian town of Vigata. Luca Zingaretti stars in the lead role and has received acclaim for the way he has brought Montalbano to life, a portrayal that’s been described as sharp, unconventional and one that perfectly captures the nuances of the anti-authoritarian Sicilian character.

Inspector Salvo Montalbano is in charge of the state police station in Vigàta, a fictional town in the fictional province of Montelusa in Sicily, Southern Italy. Montalbano investigates criminal acts which he always manages to solve by reconstruction thanks to his intelligence and the help of his team which includes his deputy, Domenico ‘Mimì’ Augello, Giuseppe Fazio, Galluzzo, and Agatino Catarella. Salvo has a long-distance, tempestuous relationship with Livia Burlando who lives in Genoa.