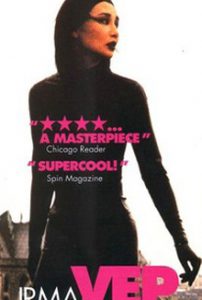 Washed-up French director René Vidal (Jean-Pierre Léaud) hopes to turn his career around with an update of “Les Vampires,” a silent-era masterpiece about about a notorious ring of thieves, led by crafty female crook Irma Vep. René brings in Chinese star Maggie Cheung (Maggie Cheung) to play Vep, but unexpected roadblocks arise on the set. Maggie doesn’t know French, she’s pursued by obsessive lesbian crew member Zoe (Nathalie Richard) and her character’s criminal ways begin to rub off on her.

Olivier Assayas’s live-wire international breakthrough stars a magnetic Maggie Cheung as a version of herself: a Hong Kong action-movie star who arrives in Paris to play the latex-clad lead in a remake of Louis Feuillade’s classic silent crime serial Les vampires. What she finds is a behind-the-scenes tangle of barely controlled chaos as egos clash, romantic attractions simmer, and an obsessive director (a cannily cast Jean-Pierre Léaud) drives himself to the brink to realize his vision. Blending blasts of silent cinema, martial-arts flicks, and the music of Sonic Youth and Luna into a hallucinatory swirl of postmodern cool, Assayas composes in Irma Vep a witty critique of the nineties French film industry and the perennial tension between art and commercial entertainment.