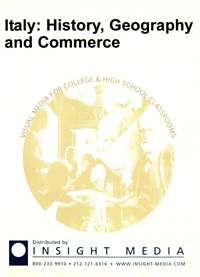 Gabriella Bertolissi: It has a very long, long history and a very colorful one. Possibly, I could start with the Etruscans which were pre-Roman. They were actually… possibly a group that came to Italy from the east.  May have had a Greek influence and centered in central Italy around Umbria, and the civilization was quite developed actually. And there are still signs of this civilization in terms of pottery and excavations and digs that are going on in Umbria, especially around the city of Orvieto. The Etruscans had a particular language, unfortunately not all of it is decipherable. So some texts are actually able to be read or inscriptions basically from tombs and things like that. But not very much is known about and them in fact….etc.