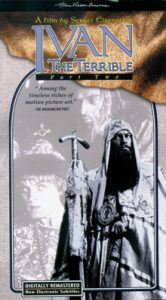 Ivan the Terrible is a two-part historical epic film about Ivan IV of Russia, written and directed by the filmmaker Sergei Eisenstein. It was Eisenstein’s last film, commissioned by Soviet Premier Joseph Stalin, who admired and identified with Ivan.  Part I was released in 1944; Part II, although it finished production in 1946, was not released until 1958, as it was banned on the order of Stalin, who became incensed over the depiction of Ivan therein. Eisenstein had developed the scenario to require a third part to finish the story but, with the banning of Part II, filming of Part III was stopped; after Eisenstein’s death in 1948, what had been completed of Part III was mostly destroyed.  The film is mainly in black-and-white, but contains a few color scenes towards the end of Part II.

In 1547, Ivan IV (1530-1584), archduke of Moscow, crowns himself Tsar of Russia and sets about reclaiming lost Russian territory. In scenes of his coronation, his wedding to Anastasia, his campaign against the Tartars in Kazan, his illness when all think he will die, recovery, campaigns in the Baltic and Crimea, self-imposed exile in Alexandrov, and the petition of Muscovites that he return, his enemies among the boyars threaten his success. Chief among them are his aunt, who wants to advance the fortunes of her son, a simpleton, and Kurbsky, a warrior prince who wants both power and the hand of Anastasia. Ivan deftly plays to the people to consolidate his power.