Ivan Vasilievich: Back to the Future 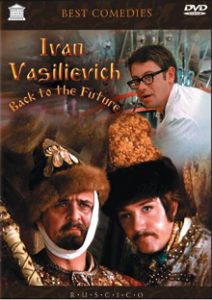 The story begins in 1973 Moscow, where engineer Aleksandr “Shurik” Timofeyev (Aleksandr Demyanenko) is working on a time machine in his apartment. By accident, he sends Ivan Vasilievich Bunsha (Yury Yakovlev), superintendent of his apartment building, and George Miloslavsky (Leonid Kuravlyov), a burglar, back into the time of Ivan IV (The Terrible). The pair is forced to disguise themselves, with Bunsha dressing up as Ivan IV (tsar) and Miloslavsky as a knyaz (duke) of the same name.  At the same time, the real Ivan IV (also played by Yury Yakovlev) is sent by the same machine into Shurik’s apartment where he has to deal with modern-day life while Shurik tries to fix the machine so that everyone can be brought back to their proper place in time.