Jack Frusciante Has Left the Band 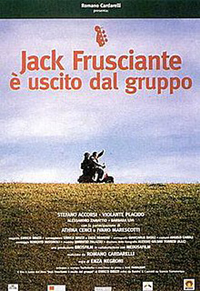 Jack Frusciante Has Left the Band tells the story of the relationship between Alex, a 17-year-old rebel, and Aidi, a girl who enters his life out of the blue one Sunday with a phone call. She asks about a poetry book and they end up talking about their projects and aspirations. Before they part she kisses him on the cheek.  Alex falls for her, and later asks her to be his girlfriend. She begins behaving increasingly coldly to him until she finally says that she doesn’t want any relationship because she’ll be leaving for the States the following year and doesn’t want to be in a long-distance relationship.  Alex accepts her decision. Nonetheless, they maintain a relationship that, though not full-blown love, is stronger than mere friendship. Meanwhile, Alex takes a position in opposition to bourgeois society, rejecting the commonplace life that everyone expects him to be leading in the future and he befriends Martino, the son of a rich family but an “outcast” like Alex himself.