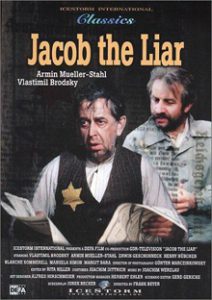 Based on the lauded novel by Jurek Becker, this dark comedy focuses on Jakob Heym (Vlastimil Brodský), a Jew living in a Polish ghetto. When Jakob is temporarily detained by German officers and overhears news on their radio that the Russians are advancing on Nazi forces, he is thrilled at the prospect of freedom. In order to convince others of the news, Jakob pretends that he has a radio of his own — a serious crime in the ghetto — and begins making up stories to maintain his deception.