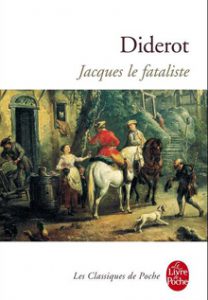 An adaptation of Denis Diderot’s novel “Jacques le Fataliste” brought to life through film. Jacques, the chauffeur, and his boss take an unusual trip, with a lot of obstacles, across the countryside of France.  The main subject of the film is the relationship between the valet Jacques and his master, who is never named. The two are traveling to a destination the narrator leaves vague, and to dispel the boredom of the journey Jacques is compelled by his master to recount the story of his loves. However, Jacques’s story is continually interrupted by other characters and various comic mishaps. As other characters tell their own stories, they, too, are continually interrupted. There is even a “reader” who periodically interrupts the narrator with questions, objections, and demands for more information or detail. The tales told are usually humorous, with romance or sex as their subject matter, and feature complex characters indulging in deception.