Joan the Maid: The Battles 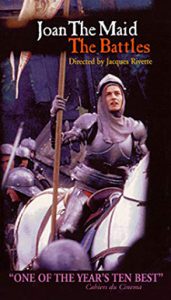 The first of a two part film of Joan of Arc’s life begins when Jeanne (Joan) has already left Domremy and is trying to convince a captain to escort her to the Dauphin. It ends during Jeanne’s first battle, at Orleans. Meanwhile, Jeanne is depicted more as a warrior than a saint with only her faith for strength.

Jacques Rivette’s 1994, two-part film on Joan of Arc is absolutely one of the director’s masterpieces.  It contains one of the great performances by Sandrine Bonnaire as the French warrior-saint and it puts Joan in a variety of situations. She’s a pious teenage girl, she’s a determined persuader/politician, she’s an inspired leader whose mere presence compels men who mocked her before meeting her to immediately acknowledge her saintliness. Bonnaire inhabits all of these modes with breathtaking immediacy.  The two parts “The Battles” and “The Prisons” concentrate not only on events not treated by other films, but on the spaces between the most famous events of Joan’s life. Rivette applies a cinematic style that’s both impassioned and elegantly simple and rational to Joan’s inner and outer life, using long takes and brilliantly considered camera movements throughout.