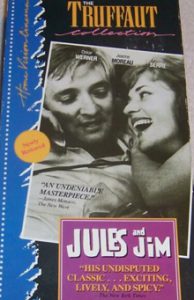 In the carefree days before World War I, introverted Austrian author Jules (Oskar Werner) strikes up a friendship with the exuberant Frenchman Jim (Henri Serre). Both men fall for the impulsive and beautiful Catherine (Jeanne Moreau), but it’s Jules who wins her hand. After the war, Jim visits Jules, Catherine and their daughter in their Austrian home and discovers not only that his feelings for Catherine are unchanged, but also that they’re reciprocated.  This is the story of three people in love, a love that doesn’t affect their friendship, and about how their relationship evolves with the years.