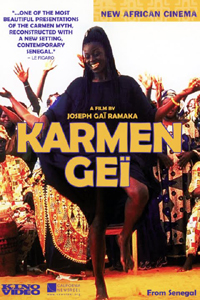 Like every Carmen, Karmen Geï is about the conflict between infinite desire for freedom and the laws, conventions, languages, the human limitations which constrain that desire. Since this is an African Carmen, freedom necessarily has a political dimension. The opening scene is set in a women’s prison on Goree Island, site of the notorious slave castle. Karmen and the women in the prison use dance and music as a weapon of resistance against dehumanizing regimentation as has so often been the case throughout the African Diaspora. Karmen’s outrageously provocative performance seduces Angelique, the warden, the symbol of authority, inverting the power relationships within the prison. Karmen literally transforms prison life into a musical production number celebrating the triumph of her sexuality and that of the other women. Karmen is called, “She who wreaks havoc,” signifying that she is both a liberator and a destroyer of every order.