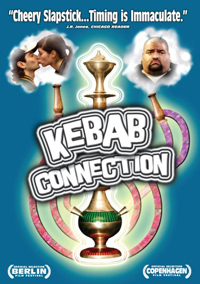 A delightful, immigrant comedy from Anno Saul and Fatih Akin (Head On) that reminds us how integration really works.  Young Turkish hip-hopper Ibo dreams of making the first German kung-fu film. He hones his craft by making an extremely successful commercial spot for his uncle’s kebab stand. Ibo’s a hit and life is delicious…until his German girlfriend Titzi tells him she’s pregnant.  After Ibo’s panicked reaction, Titzi dumps him. His parents, upset that he impregnated a German, kick him out of the house. Worst of all, his second commercial is a flop! Stewing in frustration, he gives in to the temptations of the rival Greek restaurant-owner across the street (and his beautiful daughter!) and agrees to make a commercial spot for his uncle’s worst enemy. When the local mafia gets involved, Ibo can finally put his Kung-Fu talents to the test.