Keita! Voice of the Griot 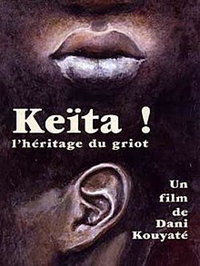 Keïta is a retelling of the first third of Sundjata Keita’s 13th-century epic, Sundjata. It tells of Mabo Keïta (Dicko), a thirteen-year-old boy who lives in a middle-class family in Ouagadougou and attends a good school. One day he encounters Djeliba Kouyate (Kouyaté), an elderly griot, who wants to tell the young Keïta the origin of his name, being related to Sundjata (Boro). Kouyate begins his story with the Mandeng creation myth: As all living beings come together in the newly formed Earth, one man proclaims to the masses that he wants to be their king. They respond, “We do not hate you.” The old griot goes on to tell how Keita’s family are descended from buffalo, the blackbirds are always watching him, and how people have roots that are deep in the earth. The film shows realistic-looking flashbacks to ancient times and ends with Sundjata Keita being exiled from the Kingdom of Mande, to which he lays claim.