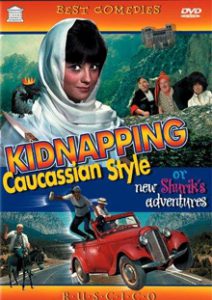 Kidnapping, Caucasian Style is a 1967 Soviet comedy film with a humorous plot revolving around bride kidnapping, an old tradition that used to exist in certain regions of the Northern Caucasus.  Journalist Shurik arrives in the Caucasus in order to study local culture and folklore, the ancient customs and traditions of the people in this region. By chance he meets and befriends a beautiful girl from the mountainous region, called Nina, which the wealthy and powerful local governor, Saakhov, is planning to marry, if not willingly then by force. Using the gullible journalist as a strawman, Saakhov and his henchmen (the “Coward”, the “Fool”, and the “Pro”, a trio of comic antiheros) are able to kidnap Nina as planned. However, realizing that he has been deceived, Shurik who has fallen for Nina, rushes to rescue her, for a happy ending.